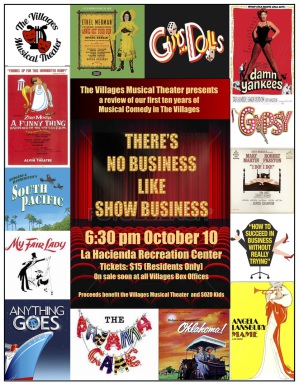 A review of VMT's First 10 years of musical comedy

In the beginning, there was Carol Greenfield, Diane Boorum and “South Pacific.” That is the genesis of The Villages Musical Theater. It started 16 years ago in Greenfield’s living room. She and Boorum had appeared in a production in Leesburg and the two Villagers thought it was time to form a musical theater group here.

“We wanted to start a company and see if anyone else was interested – we had 60 people at our first meeting,” Greenfield said Wednesday during an anniversary celebration of The Villages Musical Theater at La Hacienda Recreation Center.

It was called “There’s No Business Like Show Business.” And it featured an all-star cast doing musical numbers and dances from the first decade of musical comedy for the Villages Musical Theater.

During the first meeting in 2002, everyone voted on what musical to present. “South Pacific” was the winner. There was only one problem.

“We didn’t have any money to pay for the licensing rights,” Greenfield said. “I thought we’d have to mortgage the house. But they let us pay the fees after the performances and that’s how we came up with the money.”

“We knew theater would work here,” said Boorum, who now lives in Leesburg. “I’m so glad it has become a success. It’s always changing but there are so many talented people in The Villages it keeps going, and that’s why tonight is so special.”

Billie Thatcher played Nellie in the 2002 production of “South Pacific” and returned in that role to open the show.

“This is a very emotional night for me,” Thatcher said before going on. “I cried after rehearsal, there are so many memories and so many people I’ve worked with. It means a lot to me. I just hope I can get through it.”

Thatcher was dressed in a white sailor uniform and sang “I’m In Love With a Wonderful Guy” with the same shimmering spirit she did back in 2002.

Speaking of energetic performances, Bill Davis, Bob Stehman, Marty Butler and Woody Wood teamed up for “You’ve Got to Have Heart” from “Damn Yankees.”

Then Sally Spieth slinked her way around the stage while tempting Marty Butler with “Whatever Lola Wants” from “Damn Yankees.”

Janet Maloney and Bob Stehman slowed the pace with a tender, romantic ballad, “My Cup Runneth Over,” from “I Do I Do.”

Becky MacIntyre, like the character in the musical, was stuffy and sneezy singing “Adelaide’s Lament” from “Guys and Dolls.” Sue Schuler shined with exuberance on “I Could Have Danced All Night” from “My Fair Lady.” And Ray Leggiero took the spotlight from the same show with a bittersweet take on “I’ve Grown Accustomed to Her Face.”

The always-elegant Jan Lavin had some fun with a lively “I Get a Kick Out of You.” Jim Flynn wore a toga while Bruce Greenberger showed up in a dress and earned laughs on “Lovely Reprise” from “A Funny Thing Happened on the Way to the Forum.”

John Rogerson played the leading man in many of the early shows. He was romantic on “You’d Be So Easy to Love” and “Hey There.” Rogerson then hammed it up with Bonnie Williams on “Anything You Can Do” from “Annie Get Your Gun.”

Kathy Chesley-Williams and Jill Brewer scorched the stage with the dance number to “Steam Heat” from “The Pajama Game.”

Other performers included Bob Brandoni, Vanessa Russell and Richard Barth. An all joined forces for a rousing finale on “There’s No Business Like Show Business.”

Ironically, “South Pacific” will be the next big Villages Musical Theater production in March at Savannah Center. In some ways, the VMT has come full circle.

“It’s the first show we did and we may all be older, but ‘South Pacific’ never gets old,” said Sandie Hawthorne, who is directing the musical. “That musical and its themes of racism, love and war are still relevant today. People still love the story and they love the music.”

“Tonight is a culmination of the past 16 years,” said Bill Davis, chairman of The Villages Musical Theater. “It’s a night to recognize Carol (Greenfield) and Diane (Boorum) and thank them for starting all this.”

And part of that honor is bringing back “South Pacific” next year.

“It’s part of our history,” Davis said, “and also our future.”

Tony Violanti is a veteran journalist and writes for Villages-News.com.